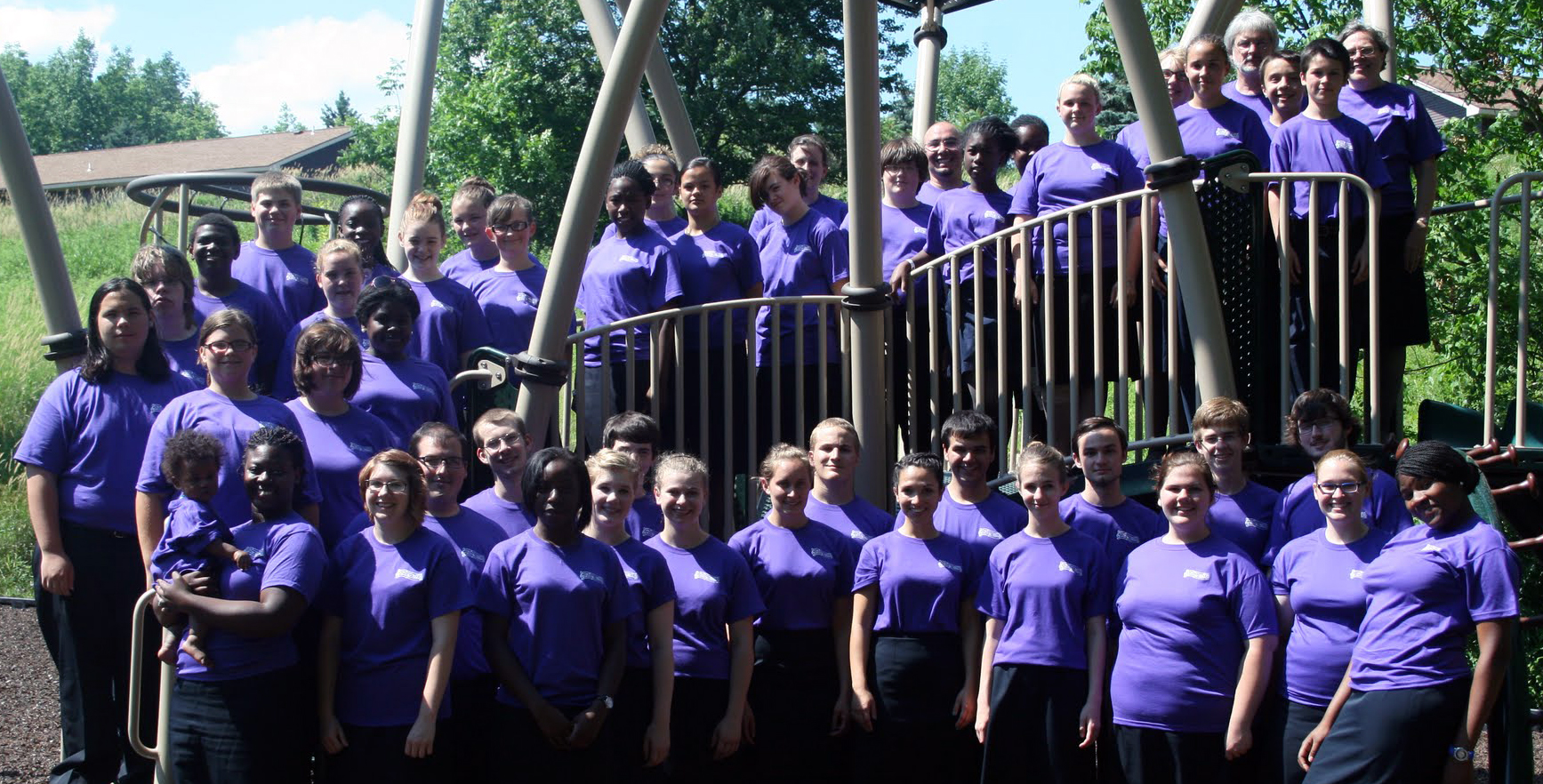 On Monday, June 18, 2012, thirty young people, ages 12 through 17, arrived at The Salvation Army Camp Ladore for thirteen days of Senior Music Conservatory. They were greeted by eight senior music instructors, eight junior staff, and five from the Pendel Music Department. Some had the first-time jitters; others were exhausted from travel (the furthest campers arrived from Seaford, DE – five hours away); still others were anxious as they would finally be taking the Leadership Track. For all, that first day involved unpacking, meeting cabin mates and counselors, taking instrumental and vocal evaluations, choosing electives, setting musical and spiritual goals, playing fun get-to-know-you games, and receiving a sneak peek into “Stomping Out the Darkness” – a devotional study on who we are, whose we are, and what those things mean for how we live our lives.

The daily conservatory schedule commenced with early-morning cabin cleaning for a meticulous inspection, competitive scoring and, later in the week, a pizza party prize! Following breakfast, the worship gathering was a highlight as the entire conservatory convened for singing, Scripture, sharing, and creative activities that guided in worship. Two periods of Majors (Brass, Percussion, Piano, Timbrels/Dance, and Guitar); two hours of singing together in Chorus; and a two-hour rotation of instrumental, theory, singing, piano, and percussion lessons amounted to seven hours of music instruction per day. Furthermore, each camper’s progress was tracked and recorded using the MAP curriculum.

Devotional groups involved constant Scripture-reading, thoughtful discussion and hands-on illustrations as campers learned to “break free of all the garbage and negative thoughts that clouded [their] minds, and to discover the joy of being a child of God.” Afternoons offered swimming and a full selection of program-directed activities, like the high ropes course, archery, the farm, horse-riding, and boating.

At Staff Night, counselors and music instructors were officially introduced as they shared musical offerings and answered questions from campers. Elective classes took place over five evenings. They included a choice of Hand Chimes, Creative Writing, Guitar, Drama, Percussion Ensemble, and Leadership. Presentations of these electives took place at opportune times, such as the morning gathering, Sunday worship, and concerts. Other evening programs included Skit Night, a moonlit pool party, Quiz-Knows (the famous conservatory trivia game show), a dress-up Banquet Recital, and a Final Concert at the Ladore Lodge.

After five days of rigorous preparation, the conservatory traveled west to Williamsport Corps where they sang and played for the Sunday morning service. The group then headed back east to West Pittston Corps to do the same for an afternoon concert, which was punctuated by select camper solos and testimonies of active faith-growing. The next day’s trip to Rickett’s Glen State Park was well-deserved! For the second Sunday, a prayer walk, based on several themes from the devotional study, guided campers along the north-side villages and beachfront, and led them into an intimate worship time together at the wooded amphitheater.

Senior Music Conservatory 2012 proved that much can happen over two weeks of solid music instruction and practice, devotion, fellowship, and prayer. One hundred percent of campers moved to a higher MAP level. Senior staff abilities were stretched.  Junior music staff got their “teaching feet” wet. Campers witnessed their own musical efforts being used in worship. And most importantly, the Holy Spirit moved in many lives, shattering lies of darkness by the light of God’s truth.