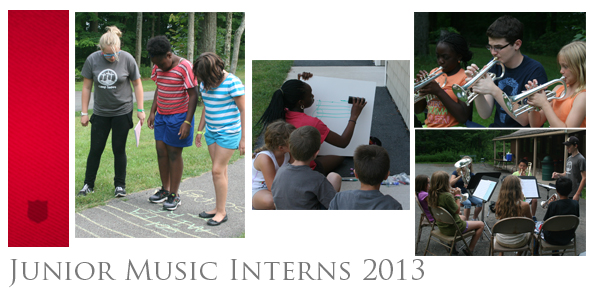 Round One: Over an orientation weekend held in Philadelphia, June 7-9, the Junior Music Interns, led by the Music Department Team, established personal and team goals for the summer including: (1) ways to "jumpstart" their own personal progress in the MAP curriculum, particularly during Senior Conservatory; (2) getting into a teacher mindset, and (3) taking steps toward becoming senior counselor/instructors in the next year or two.

In preparation for the impending teaching during the Musicamp and Junior Conservatory weeks, the Junior Interns thoroughly covered all three current MAP forms (voice, brass and theory).
Mock lessons; goal setting and affirmation; rehearsals in preparation for a well attended Sunday School and worship service at Darby, as well as a scavenger hunt in the Art Museum area rounded out a full weekend of team-building.

Round Two: During Senior Conservatory, June 24-July 7, the Junior Music Interns were campers, but their assigned elective was Leadership Training with Harold Burgmayer. Six evening sessions covered the “leadership rainbow”; age appropriate teaching; learning styles applied to various exercises for piano, voice, brass and theory; twelve steps to giving a lesson; classroom maintenance, as well as planning and giving leadership to the united Sunday School held at East Stroudsburg Corps. As Ian Wettlaufer and Arren Boyd were already in front of Conservatory ensembles, the Junior Staff Interns were introduced to beat patterns, downbeats and cutoffs. By the conclusion of Junior Conservatory, each Junior Music Intern would be rehearsing and conducting some ensemble.

John and Kathryn (nee Loret) Opina visited the interns and provoked discussion on what they do with music and arts at the training college and what the interns are going to teach/lead when they get back to their corps. Katie Luse, the devotional teacher for Senior Conservatory, shared insight into the life of Josiah as a young exemplar leader. Katie prayed into the lives of each intern in three areas: purity, fears and holes, using the image of a pot. There was an empowering openness in that evening’s prayer and confession.

Round Three: Lisa Collier, even going back to the orientation weekend, held nearly daily devotions with the Junior Music Interns, based on the book Pure Praise by Dwayne Moore. These sessions continued during the busy Musicamp week—July 11-20. Every intern was assigned to a chorus (some conducted), and we marveled as sidewalk chalk, hangman games, white boards and all kinds of ingenious teaching games actively brought theory and major classes to life. The interns all participated in Ladore Band or Timbrels, and benefitted from partnerships with the experienced Musicamp staff.

Round Four: Leadership training sessions under Cathy Hayes’ direction were held each afternoon for two hours during the Junior Conservatory (July 24-31). Along with leadership topics, the majority of time was given to allowing the Junior Music Interns to work on developing their conducting skills with a real brass ensemble in front of them. Each intern had multiple teaching responsibilities, especially during the rotations periods (theory, sight-singing, theory and practicum).
Goals were set for the fall in implementing the summer’s instruction into their own corps program. Ben Clarke had a tremendous experience teaching a few pieces to the chamber group of advanced Junior Conservatory students. The Junior Music Interns planned and shared leadership of the Junior Conservatory Finale with set-up, prayer, testimonies, and even a scripture lesson.