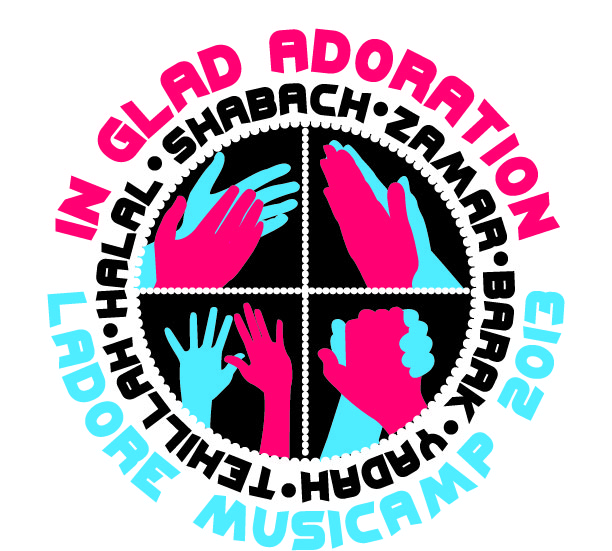 Praise Him in Glad Adoration
Ladore Music and Arts Camp 2013

Ask any Pendel music camper what these Hebrew words mean, and they will be able to both tell and show you! Because the command to praise is so universal, each song, dance, presentation, and recitation of Scripture during the nine day Pendel Music and Arts week at Camp Ladore was a true reflection of the theme, “Praise Him in glad adoration!”

Registration day at Ladore Music and Arts Camp was a well-oiled machine. Staff greeted campers with smiles and songs. Luggage was put on a truck and delivered to cabins. Nurses were on duty. And every single room and corner of the Pavilion was occupied with evaluations. With ten majors to choose from (brass, voice, piano, percussion, guitar, timbrels, dance, choreodrama, step, and music makers, each divided into skill levels – plus theory and chorus for all campers), the PARC buzzed with anticipation for the week.

The first evening, after getting settled into their cabins, campers were formally welcomed to camp with music by the staff ensemble, a look ahead to the “Praise” devotional theme, and an introduction of special guest composer, conductor, and soloist Marcus Venables from the land of Canada. Throughout the week, B/M Venebles was a transparent vessel in body and in spirit. He shared his written music, his skillful cornet-playing, his testimony, his encouragement, (and his hockey skills). He spoke softly, but his life spoke clear enough, and many were blessed through him.

Daily morning small-group Bible studies set the tone for each day as campers looked to God’s Word to learn about different expressions for praising God. Evening gatherings were a daily worship time with singing, Scripture memorization, drama sketches that highlighted the “praise” theme for each day, and a devotional by a music camp staff member.

During the week, the Music Department held workshops for music camp staff, which included updates and changes for both the Music Arts Proficiency (M.A.P.) curriculum and the structure of divisional music groups and rehearsals. These two sessions proved to be uplifting for the leaders as they shared, discussed, and were equipped with tools for use at their home corps.

Choral Night began with a glorious united arrangement – “In Glad Adoration,” using the familiar songs “Clap Your Hands, All Ye People,” Father, I Adore You,” “Thy Loving Kindness is Better Than Life,” and “We Bow Down.” Each chorus and voice class presented a song, along with vocal solos by Olivia Renkel (Williamsport) and Rachel Lee (Lancaster).

The Lord’s Day gathering centered around all eight Scripture verses that had been memorized during the week. During this special time, the choreodrama class presented a powerful piece about waving our white flags in surrender to God. Special guest Marcus Venables (North York Temple) and camper Ian Wettlaufer (Lancaster Citadel) both gave testimonies with the theme of surrendering. After a sermon by Captain Mike Laro using the words of “It is Well with My Soul,” cabin groups prayed, and campers accepted Christ and submitted to His will all throughout the auditorium.

The Lord’s Day banquet was a time for the entire camp of over 300 campers to eat a special meal together in a bright, decorated dining hall – each table served by music camp staff. There were table photos, music, good food, and laughter as the campers were guests of honor.

At the Finale Concert, every camper performed with a Majors group, sang in a chorus, and participated in the two full-camp united pieces – “In Glad Adoration” and “Solidarity.” Under the leadership of B/M Venables and Dr. Burgmayer, Ladore Band set the stage at each evening program as well as at the Finale. Award-winners from each class were recognized, and parents and corps families were present to witness the culmination of an eventful, but sacred week.

Praise Him in glad adoration!