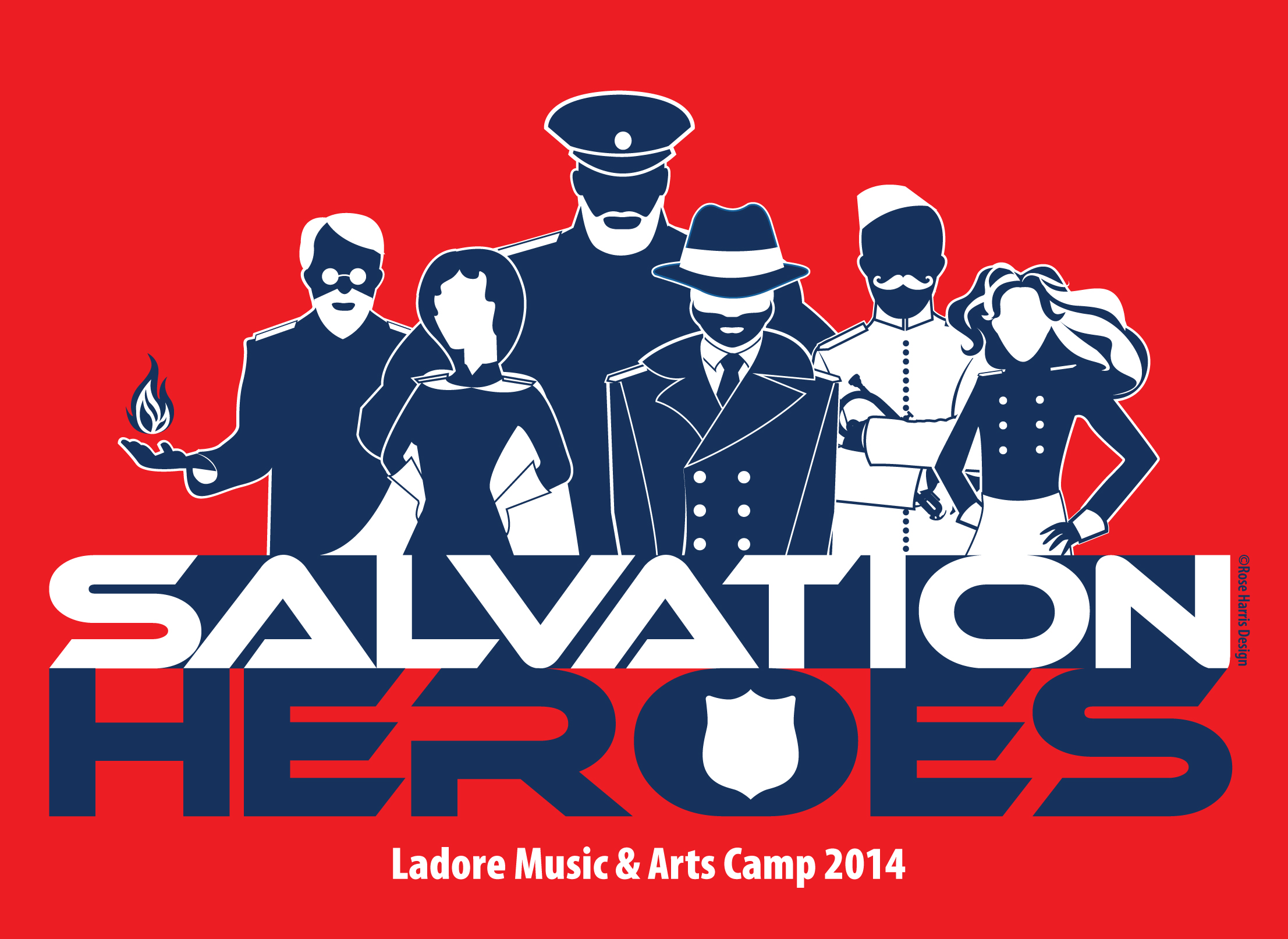 Elijah Cadman, Eliza Shirley, Evangeline Booth, George Scott Railton, Joseph Garabed, and Samuel Logan Brengle. The passion and devotion of these “heroes of faith” are the part of the tapestry of The Salvation Army’s rich Christian doctrine, history, and culture.

From July 11 to 19, 2014, over 332 campers from Eastern Pennsylvania & Delaware, plus staff, studied the backgrounds and evangelism of these seven in the context of modern-day superheroes. Nicknames such as the Fist (Cadman), the Kid (Shirley), and the Cape (Evangeline Booth), along with movements to go along with each, captured the interest of even the youngest seven-year-old on camp. Black and white video clips of each of the seven in action, wearing their Salvation Army uniforms while portraying Jesus to an evil world, drew in the teen campers who are beginning to make their own marks in their homes and schools by standing up for Christ. Built around this superhero theme were small-group devotionals that highlighted Bible examples and were illustrated at full-camp gatherings with Scripture, songs, and skits.

Each day, campers received three-and-a-half hours of music instruction, given by Salvation Army officers (pastors) and lay people. There was something for every child – brass, piano, guitar, and percussion for the instrumental students; and dance, drama, choreodrama, and step for the arts students. Everyone sang!

Bandmaster Derek Lance, of the New York Staff Band, was the special guest for the week. An alumnus of Camp Ladore himself, he spent many childhood summers at Ladore Musicamp and the two-week Ladore Music Conservatory, where he shined. During this week, Derek carried his same quiet spirit and led mostly by example. His music and spiritual discipline and expertise showed themselves through his flawless cornet solos and his leadership of the advanced Ladore Band and Chorus, as well as of Summer Brass - the small ensemble of teens that traveled with him. Among several memorable pieces of music that Derek led were choral pieces He Sought Me (Cox/Wileman) and Canticle (Burgmayer); and brass item Fire in the Blood (Lovatt-Cooper).

Parents and church families did not have to wait until the end of the week to witness the learning and progress that was happening at Ladore Music and Arts Camp. The Preview Concert, Choral Night, and Arts Night were showcased as early on as day four, interjected by skit nights, evening pool parties, and energetic village games. When campers were not in classes, they were swimming, boating, hiking, feeding and petting animals at the farm, camping out in tents, learning archery, riding horses, making ice cream, or just cooling off on a shady patch of grass by the lake with their cabin mates.

The Finale Concert featured individual presentations by each class, opening with a massed instrumental selection, Back to the Future (Burgmayer). A massed arts piece marked the second half of the program with “cardboard testimonies” displayed by each camper and the unveiling of a red cross made from cloth, reaching from floor to ceiling, at which every arts student symbolically bowed. “Day of Victory,” the massed choral item, ended the program as the song’s composer and former director of Ladore Musicamp, Bandmaster Ivor Bosanko, sat in the audience. With campers benched around them, including in the wings of the building, four hundred guests experienced this concert in “surround sound” from their seats in the center of the Performing Arts Pavilion.