Harrisburg Businesses Compete
In Battle of the Bells 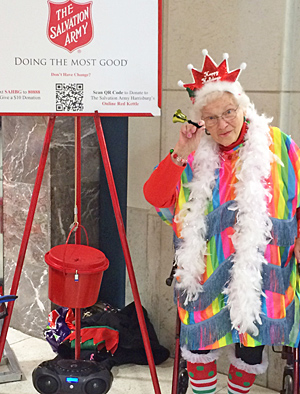 The competition kicks-off in the fall with a spirited luncheon and concludes January 2. Teams come from numerous area businesses and community organizations. In addition to bell-ringing shifts at Red Kettle locations, online red kettles, and countertop kettles, teams get creative and hold dress down days, Advent offerings, matching gifts, and other special projects to increase their team fundraising totals.

During the competition, The Salvation Army provides regular leaderboard updates, encouragement, and support to the teams. In 2011, The Woods at Cedar Run, a local retirement community, won 1st place. In 2012, The Woods were bested by Smith Land & Improvement for top honors.

Last year, Battle of the Bells teams raised more than $34,000. Following the competition, Salvation Army representatives visit each team and thank them for their support, share the results and impact they have made in the local community. Battle of the Bells has provided The Salvation Army a fun way to engage the local business community, raise money and generate good will and positive relationships with new groups and individuals.

The 2013 campaign is currently in full swing and The Woods at Cedar Run are holding on to their first place status. Team Woods had to pull out all the stops as Black Friday approached. The team strategized and decided to call in a ringer or two. And who better to appeal to the crowds then a celebrity of epic proportion, the queen of comedy herself and an American icon, Miss Phyllis Diller. After reaching out to her and describing the event, and being a senior citizen herself Miss Diller decided to heed the call of The Salvation Army bell. She arrived at the Capital City Mall to do the most good along with the members of Team Woods. While working for just four hours, Miss Diller assisted the team in raising $438.93. Another Woods team stationed at the local Karn's Food Market raised $264.07 in four hours. The team was jubilant as they have pushed further into first place! To date $2,409.00 has been raised for The Salvation Army.