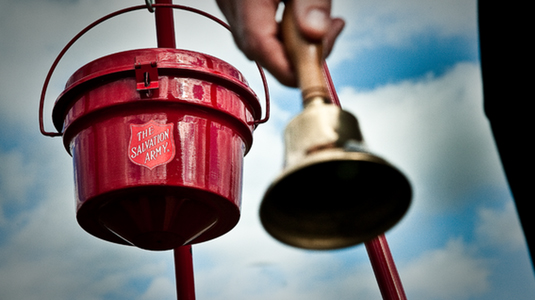 Philadelphia, PA (December 19, 2014) – The Salvation Army of Philadelphia said today that donations to its annual Red Kettle fundraising campaign are down this year throughout the region, presently reaching only 50 percent of its overall goal.

During the holiday season, The Salvation Army stations red kettles daily throughout Philadelphia to collect donations from the public. With less than one week of collections remaining in the Red Kettle campaign, which is scheduled to end on December 24, 2014, an urgent plea for individuals, corporations and groups to generously give to the Red Kettle campaign was issued today in a statement from Lt. Colonel Stephen A. Banfield, Chief Executive Officer and Divisional Commander of the Salvation Army Eastern Pennsylvania and Delaware Division.

“I am very concerned about our ability to meet the increasing demand for social services and to provide the same level of service, including nearly 250 community programs that The Salvation Army offers throughout our territory,” Lt. Colonel Banfield said.  “Due to high unemployment in our area, the number of individuals or families seeking assistance from The Salvation Army for this upcoming year far exceeds last year.  In order to help these families through difficult economic times, it is critical for The Salvation Army to meet its donation goals. ”

Proceeds from the Red Kettle campaign help provide year round programs and services to local residents who are in need of food, shelter and utility assistance, disaster relief response, as well as numerous educational, music and after-school programs throughout Philadelphia.

"We're hoping that shoppers and online donors will generously remember their neighbors in need when they see a Salvation Army bell ringer in the community during the remaining days before Christmas,” Lt. Colonel Banfield said. “The caring, compassion and pathway of hope that The Salvation Army extends to so many individuals and families throughout this area relies heavily on the generosity of those who give to our cause during the holiday season.”

Donations to The Salvation Army are also accepted online:

About The Salvation Army: