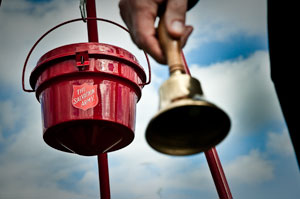 Alexandria, VA (December 18, 2013) – Bell Ringers for The Salvation Army Red Kettle Campaign will be collecting donations for five fewer days this year due to the late Thanksgiving holiday. This timing and the icy weather conditions that struck in early December could lead to a potential shortfall of $20 million. With six days left, The Salvation Army is encouraging supporters to donate to the Red Kettles both in person and online.

"The Red Kettle Campaign is our most crucial fundraising period," said Major Ron Busroe, community relations and development secretary for The Salvation Army USA. "The shorter holiday season and unfortunate winter storms have impacted the amount the organization has been able to raise this season. As a result, many programs from shelters to after school programs and meal assistance are in jeopardy of losing funding."

The Salvation Army's services go well beyond the holidays, serving more than 30 million of America's most vulnerable year round. Just $50 will help feed a hungry child for a week, $75 will help keep a family warm during the winter and $100 will provide five nights of shelter for a homeless family. To donate, Americans can:

Every year, The Salvation Army helps nearly 30 million people, that is roughly one person per second. Donations help to provide over 10 million nights of shelter, roughly 58 million meals and programming such as substance abuse recovery, after school programs and emergency shelter to children and families in need. During the holiday season, nearly 4.2 million people rely on The Salvation Army to provide their family with a warm meal on Christmas Day or a toy for their child. Through The Salvation Army's Angel Tree Program, over 1 million children are provided with necessary items and toys.

* A one-time donation of $5 will be added to your mobile phone bill or deducted from your prepaid balance. Message and Data Rates May Apply. All charges are billed by and payable to your mobile service provider. Service is available on Verizon Wireless, AT&T, Sprint, and T-Mobile. All purchases must be authorized by account holder. By participating you certify that you are 18 yrs or older and/or have parental permission. Donations are collected for the benefit of The Salvation Army by Innogive Foundation and subject to the terms found at igfn.org/t. Privacy policy: igfn.org/p. Text STOP to 80888 to stop; Text HELP to 80888 for help.