Forced to Serve as a Salvation Army Bell Ringer 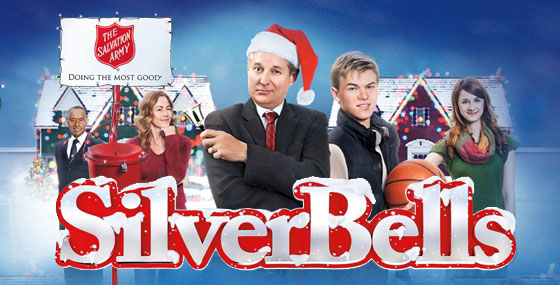 The Salvation Army will be featured prominently in the new feature film Silver Bells, which was produced by PureFlix Entertainment (PFE), the largest producer and distributor of faith-based and family films.

Silver Bells stars Bruce Boxleitner (Tron, Scarecrow & Mrs. King) and Antonio Fargas (Everybody Hates Chris, Starsky and Hutch) and is about an ambitious businessman who gets in a scuffle with a referee at his son's (The Disney Channel's Kenton Duty) basketball game and as a result, gets suspended from his job and sentenced to community service—manning a red kettle and ringing bells for The Salvation Army during the Christmas season.

At first he finds this humiliating, and in his self-pity determines to be the world's worst bell ringer, but as he encounters the people behind the kettle, his life—and especially his relationship with his son—is changed by something as simple as ringing a bell.

Catch Silver Bells on UP TV, Dish 188, DirecTV 338, Verizon FiOS channel 224 or on your local cable system on the following dates and times: